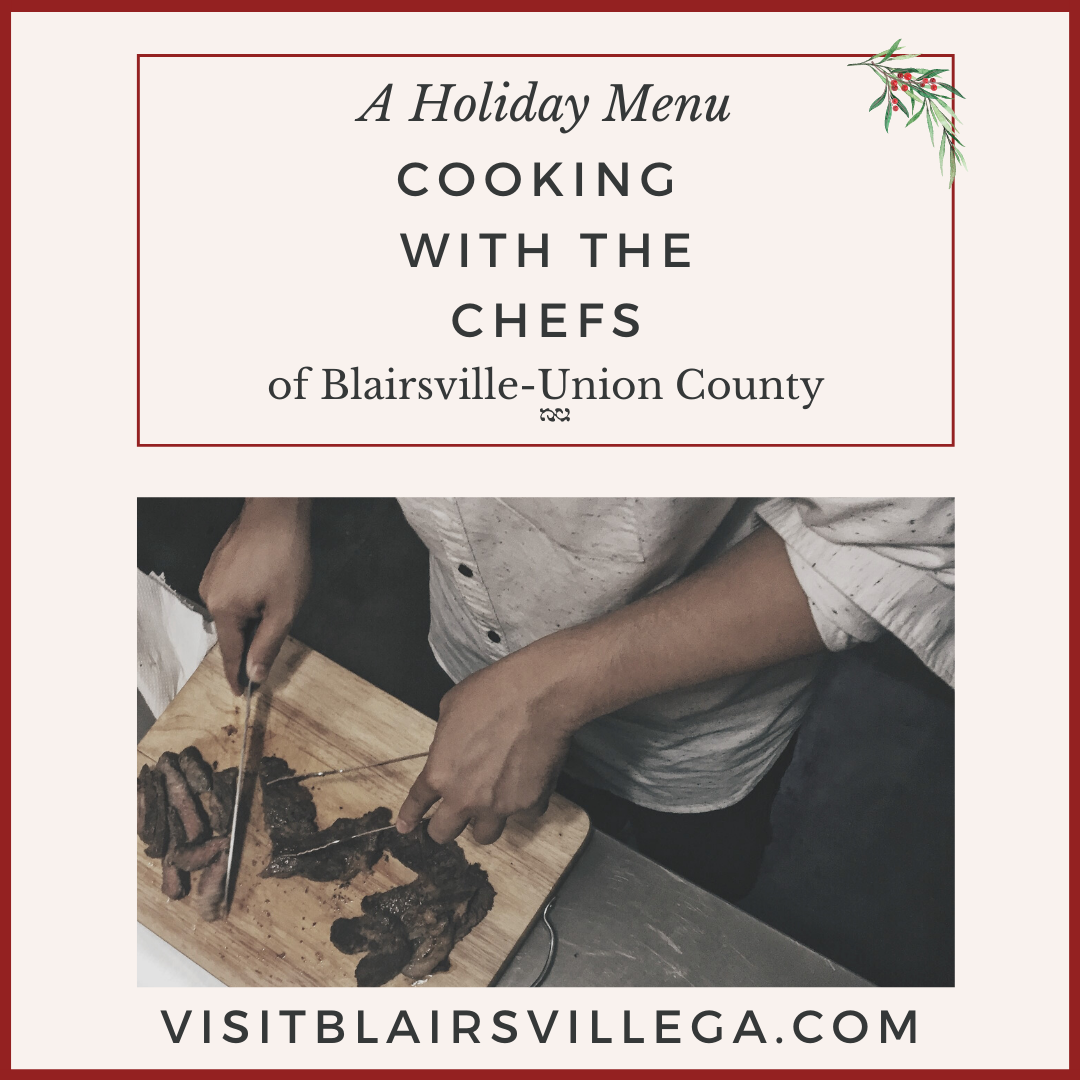 Everyone has their go-to holiday recipes--the tried and true standards we come to count on making an annual appearance in December.  During my childhood, Christmas meant I was sure to enjoy a succulent, roasted turkey, mooshy mountains of mashed potatoes drenched in a puddle of gravy, southern-cornbread dressing, and my mom’s Italian rice and sausage stuffing.  There was always a debate over the merits of jellied cranberry sauce versus scratch made with a bit of orange zest, and at our house, we always enjoyed my mom’s Swiss Egg Bread, a yeast variety perfect for leftover turkey sandwiches with cranberry mayo the day after the festivities.  This year, we decided to bring you a menu offering the best of Blairsville’s chefs.  From appetizer to entrée, our local chefs have come together to bring you a holiday menu fit for kings but simple and straight forward enough for any household cook to deliver to the table.  From a mountain moonshine cocktail, to pecan crusted shrimp starters, to a buttermilk, deep fried chicken with butternut squash gravy, to buttery corn-cakes, to a creamy cabbage casserole, you will find unique local takes on Christmas classics.  Don’t be surprised by the simple dessert offering.  It does double-duty as a comforting crescendo to dinner and a light breakfast option for the morning after your big day.  Join us as we cook with the chefs of Blairsville-Union County. 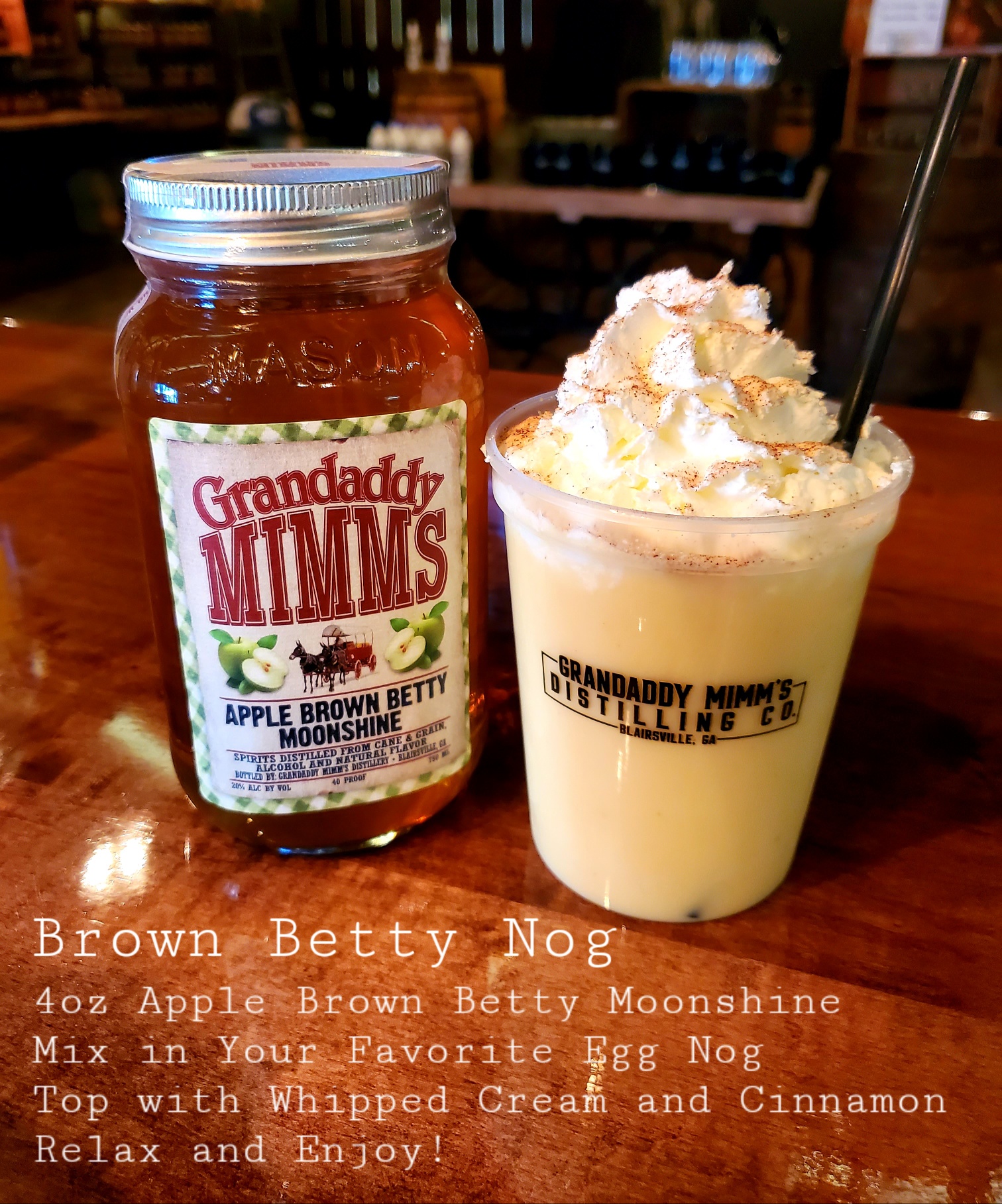 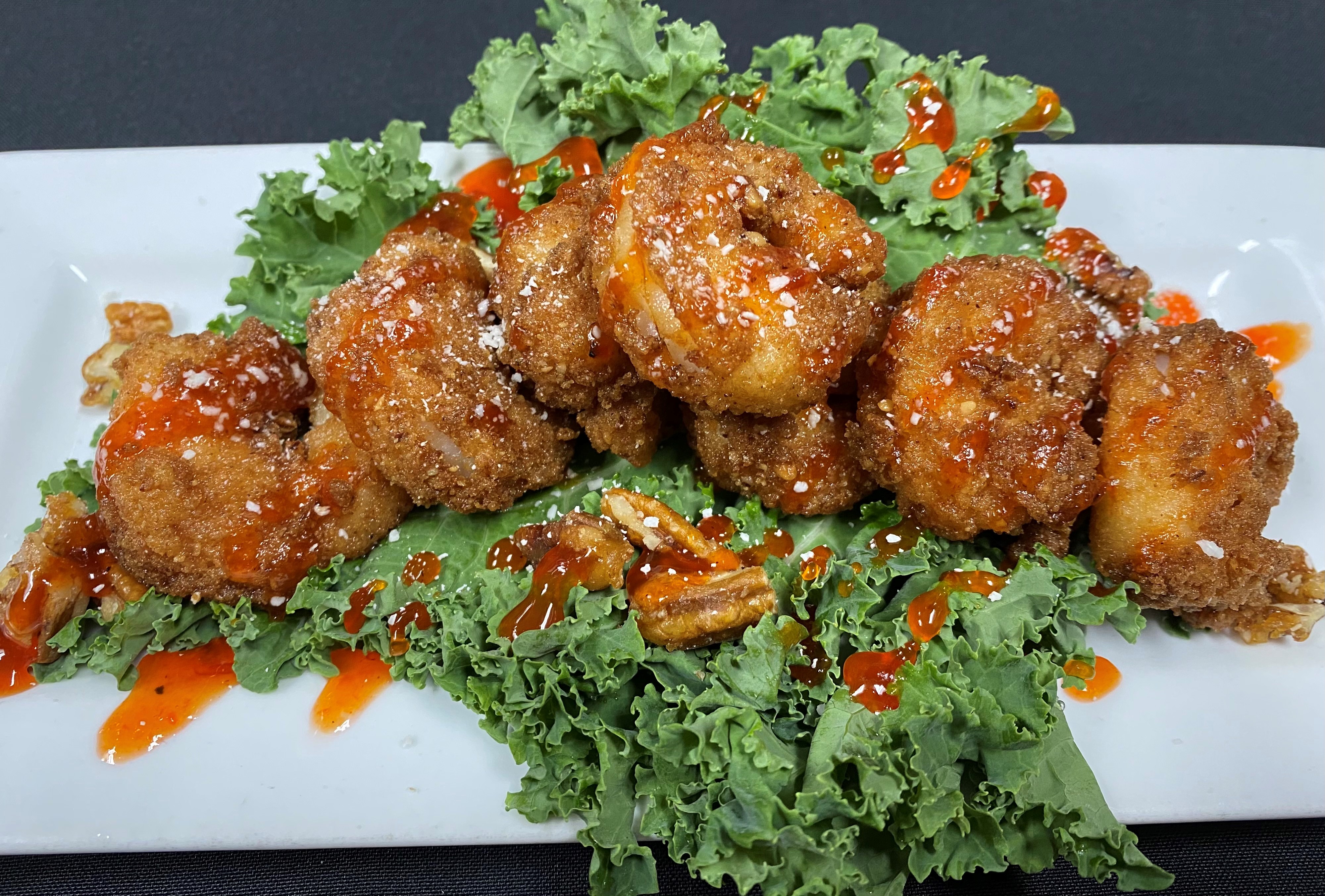 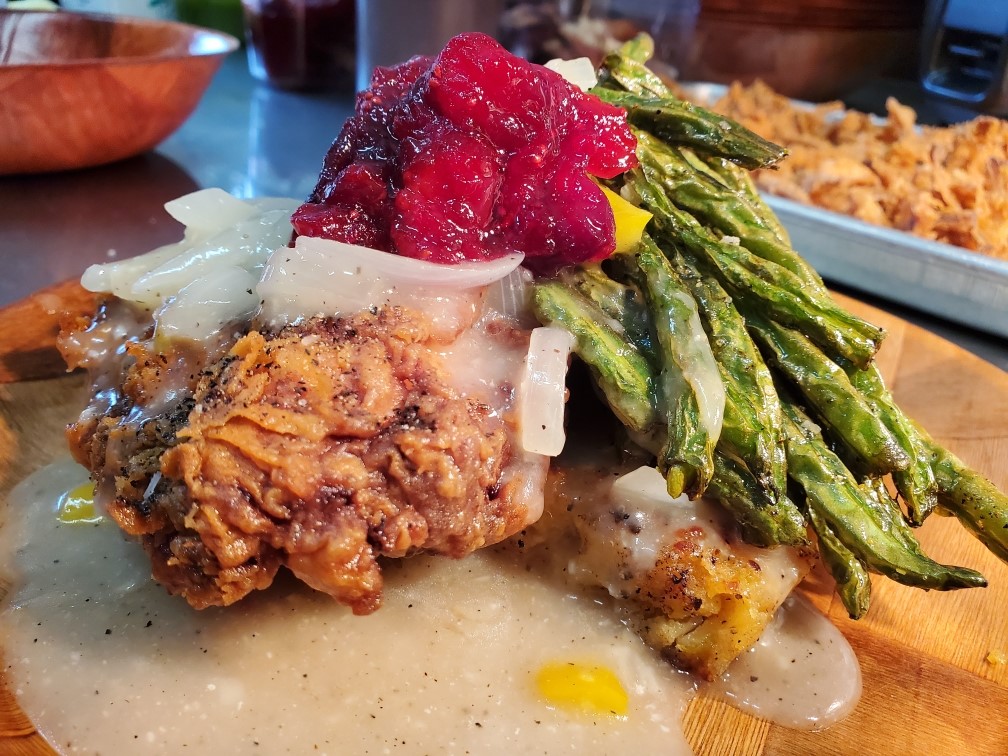 CHICKEN INGREDIENTS
Chicken breast on bone
Buttermilk
Hot Sauce
Seasoned Flour (Salt, Pepper, Cayenne or any other seasoning you like)
Preparation:
Submerge and soak breast in buttermilk with your favorite hot sauce for at least 8 hours or overnight.
Bread in seasoned flour and fry at 350 degrees until internal temperature reaches 165 degrees and golden crust forms on the outside.

Preparation:
Mix all ingredients with crumbled cornbread and season with salt and pepper.
Pour in greased 9 x 13 and bake at 400 degrees till set.

Preparation:
Tip and tail blue lake green beans.  Drizzle in olive oil and roast in oven at 400  approximately 20 minutes.  Remove from oven and add to mixing bowl.  Season with salt and pepper and buttermilk ranch seasoning powder.  Toss to coat. 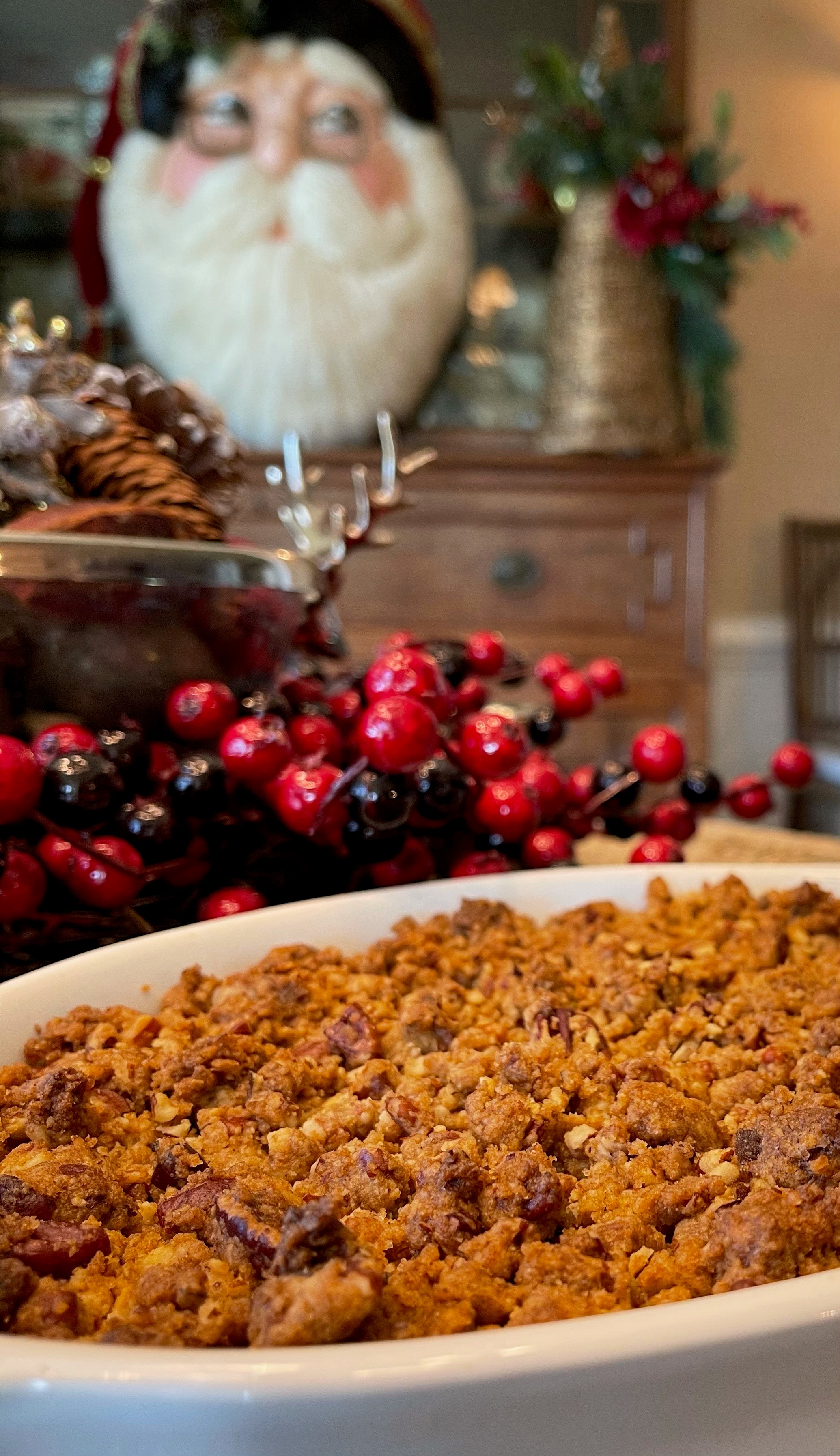 Preparation: Mix all ingredients in a bowl. You can add cinnamon to taste if you like. Pour into a greased 9x13 dish.

THE SAWMILL’S GRILLED CORN CAKES
By:  Amy Kight, Co-Owner and Recipe Creator at The Sawmill Place

Preparation:
Cut corn off the cob.  In a large mixing bowl, whisk 6 eggs.  Whisk in milk and melted butter.  In a separate bowl whisk flour, corn meal, salt & pepper.  Combine dry and wet ingredients and add corn kernels, cheese and chives.  Grill on flattop or skillet using olive oil or butter. Grill evenly on both sides. (A few pro tips:  Source corn for this recipe locally and in season for best taste.  Choose chives from self-grown herb garden whenever possible.  Cakes should not be mushy, similar to pancake consistency, and grilled temp should reach 300 degrees for the perfect corn cake. 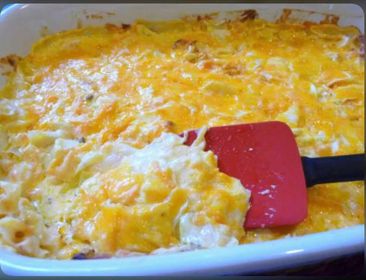 HOLIDAY CABBAGE CASSEROLE
By:  Kevin Sharpe, Chef at The Bean Pod Shoppe
INGREDIENTS
6-8 Strips Thick Raw Bacon Chopped
1 Head Cabbage Chopped
1 Onion Thinly Sliced
1 Tbsp Salt
SAUCE
1 Stick Butter
½ Tsp Nutmeg
1 Clove Garlic Minced
¼ Cup Flour
3 Cups Milk
2 Cups Heavy Cream
Preparation:  First you’ll need a large stock pot on medium heat. Put chopped, raw bacon in bottom of sauce pot with a drizzle of oil.  Cook until bacon starts to brown slightly approximately 3 minutes.  Add sliced onions; cook and stir for 5 minutes.  Add chopped cabbage and mix.  Add water until cabbage is almost submerged, then add your salt and cook until tender.  While cabbage is boiling, in a medium-size sauce pot on medium heat, add butter, nutmeg, and garlic; cook for 3 minutes.  Add flour to start a roux and whisk while 2 minutes.  Add 1 cup of milk and whisp until mixture becomes very thick, coating back of a spoon.  Add the rest of your milk and cream while whisking and bring to a boil.  Add salt and pepper to taste.  (Chef Tips:  If you over boil sauce and it becomes too thick, just add more milk.  Conversely, if too thin, boil on low/medium heat until desired thickness.)  Next, drain cabbage very well in strainer, and be sure all water is out or casserole will be watery.  Place cabbage into large, deep baking dish; poor sauce over it evenly.  Finally, add thick layer of your favorite shredded cheese.  (The Chef recommends sharp, white cheddar or cheddar jack.)  Bake for about 40 minutes at 350 degrees until sauce is bubbling and cheese is golden brown. 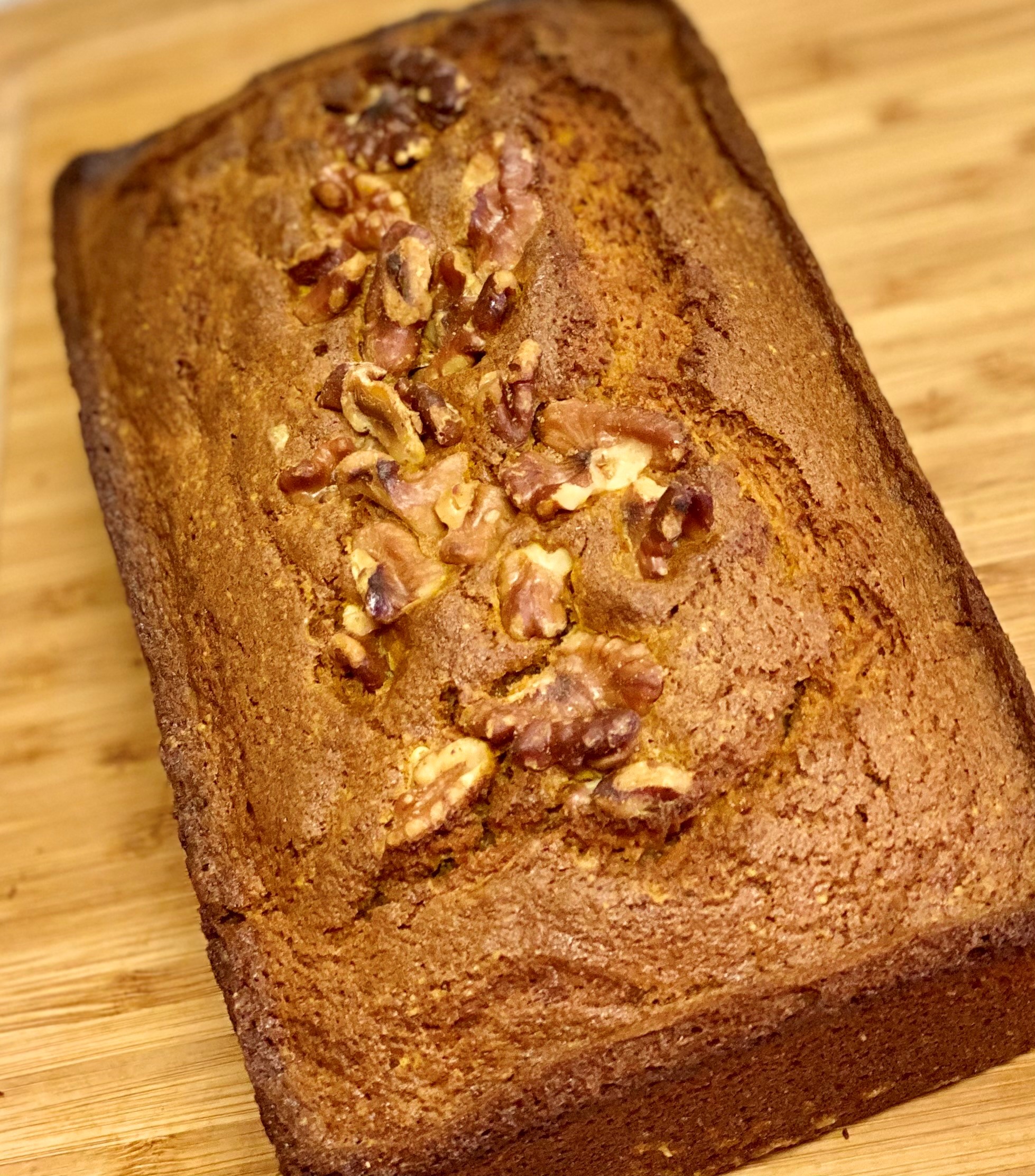 PUMPKIN BREAD
By: Jody Atkins, Co-Owner and Creative Consultant of Dixie Confexions
INGREDIENTS
3 cups All Purpose Flour
1 1/2 Tsp Baking Soda
3/4 Tsp Baking Powder
1 1/2 Tsp Ground Cinnamon
1 1/2 Tsp Ground Nutmeg
1 1/2 Tsp Ground Cloves
3/4 Tsp Salt
1 Cup Unsalted Butter, Room Temperature
3 Cups Sugar
3 Large Eggs
2 3/4 Cups Pumpkin (from can is fine)
1 Cup Walnuts
Preparation:
Preheat oven to 350 degrees. Grease two 9×5 loaf pans very well with non-stick baking spray. In a medium size bowl, combine the flour, baking soda, baking powder and spices. Whisk together to combine, then set aside. In a large mixer bowl, combine the butter and sugar and mix just until combined. Add the eggs one at a time, mixing until well combined after each addition. Turn the mixer to medium speed and beat until light and fluffy, 2-3 minutes. Add the pumpkin and beat until well combined. The mixture may like a little curled and separated.  Add the dry ingredients and mix on low speed just until combined. Do not over mix. If you need to stir it a bit more, use a spatula and do it gently by hand.  Add 1 Cup of walnuts to batter (save some to put on top before baking). Divide the batter evenly between the two loaf pans and bake for 60 to 70 minutes or until a toothpick inserted in the middle comes out clean. Remove the loaves from the oven and allow to cool for about 10 minutes and then remove to a cooling rack to cool completely. (Chef Tip:  Serve this a la mode for a real crowd pleaser and dust with cinnamon.  Next morning, serve toasted with a pat of butter and strong french press coffee.) 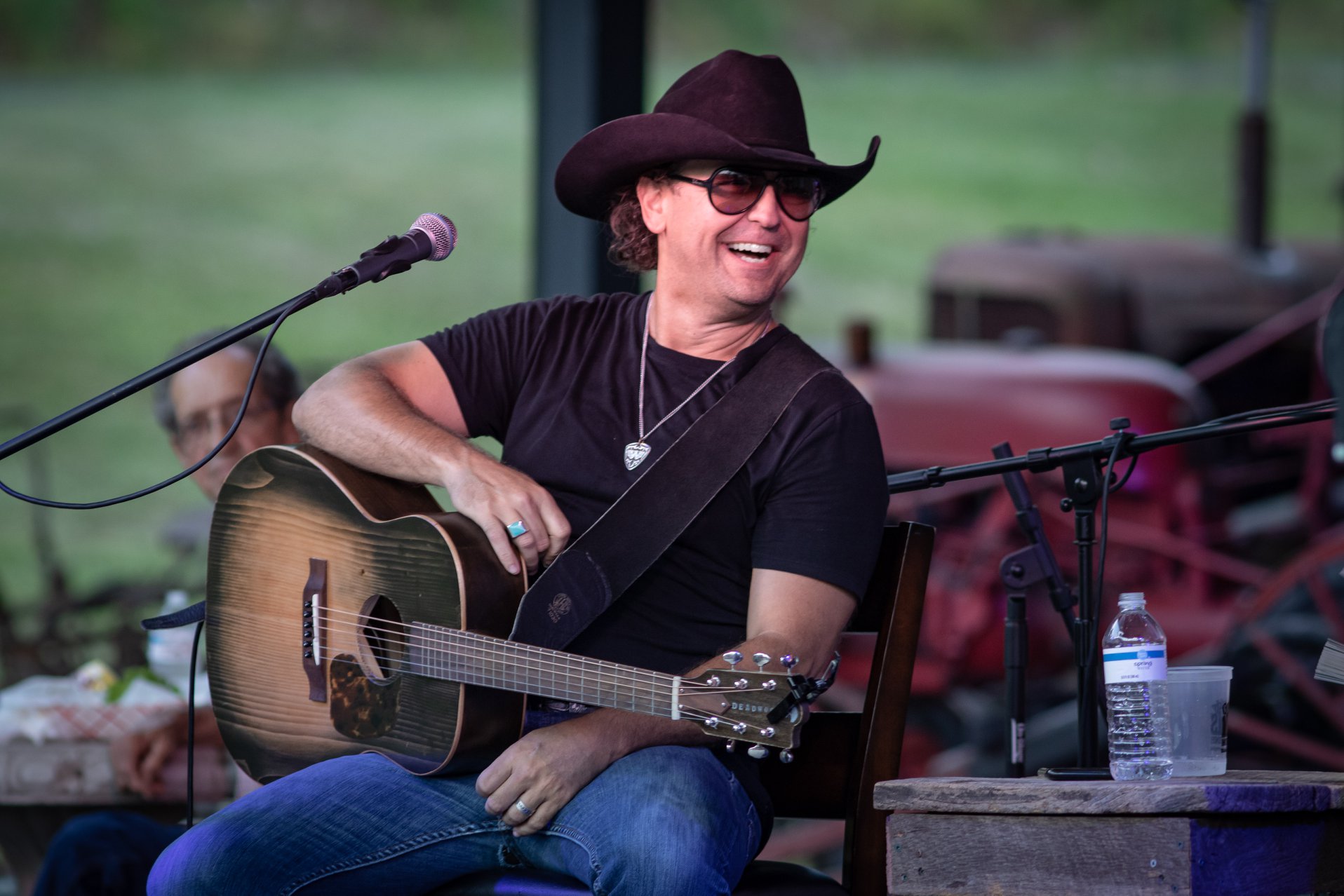 Tommy Townsend
Lead singer of Waymore's Outlaws, Tommy Townsend launched Grandaddy Mimms Distilling Company using his grandfather's recipe for moonshine.  Most notable of late is the fact that Tommy Townsend is responsible for the first legal whiskey ever to be distilled within the city limits of Blairsville, Georgia.  With the grand opening of his newly located distillery in the old Goldkist co-op building just off the historic, downtown square in Blairsville, Tommy brings many unique flavors of moonshine in addition to a new, velvety corn vodka, and a soon-coming 5 year whiskey.  Steeped in history and richly rooted in the music of Appalachia, this new distillery promises to become a destination location in the mountains. 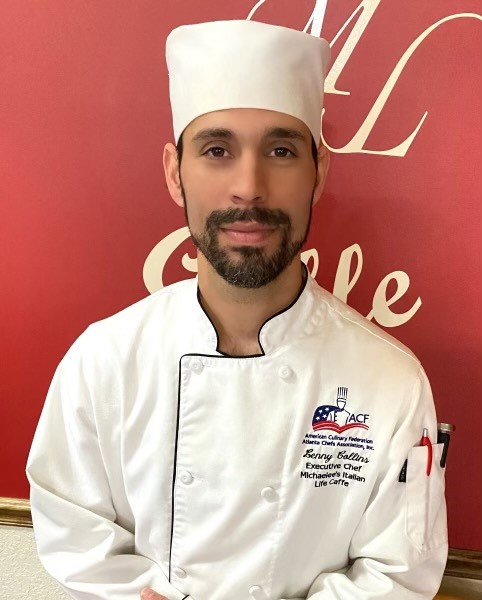 Lenny Collins
Chef Lenny graduated from Indian River State College with an A.A.S. degree in culinary arts and restaurant management.  He now works as an Executive Chef at Michaelee's Italian Life creating culinary masterpieces for his menu and wine pairings.  He is a ServSafe instructor for the management program through the National Restaurant Association.  His passion continues to grow being involved in the community and special anniversary, holiday, birthday, and celebrations of cherished guests. 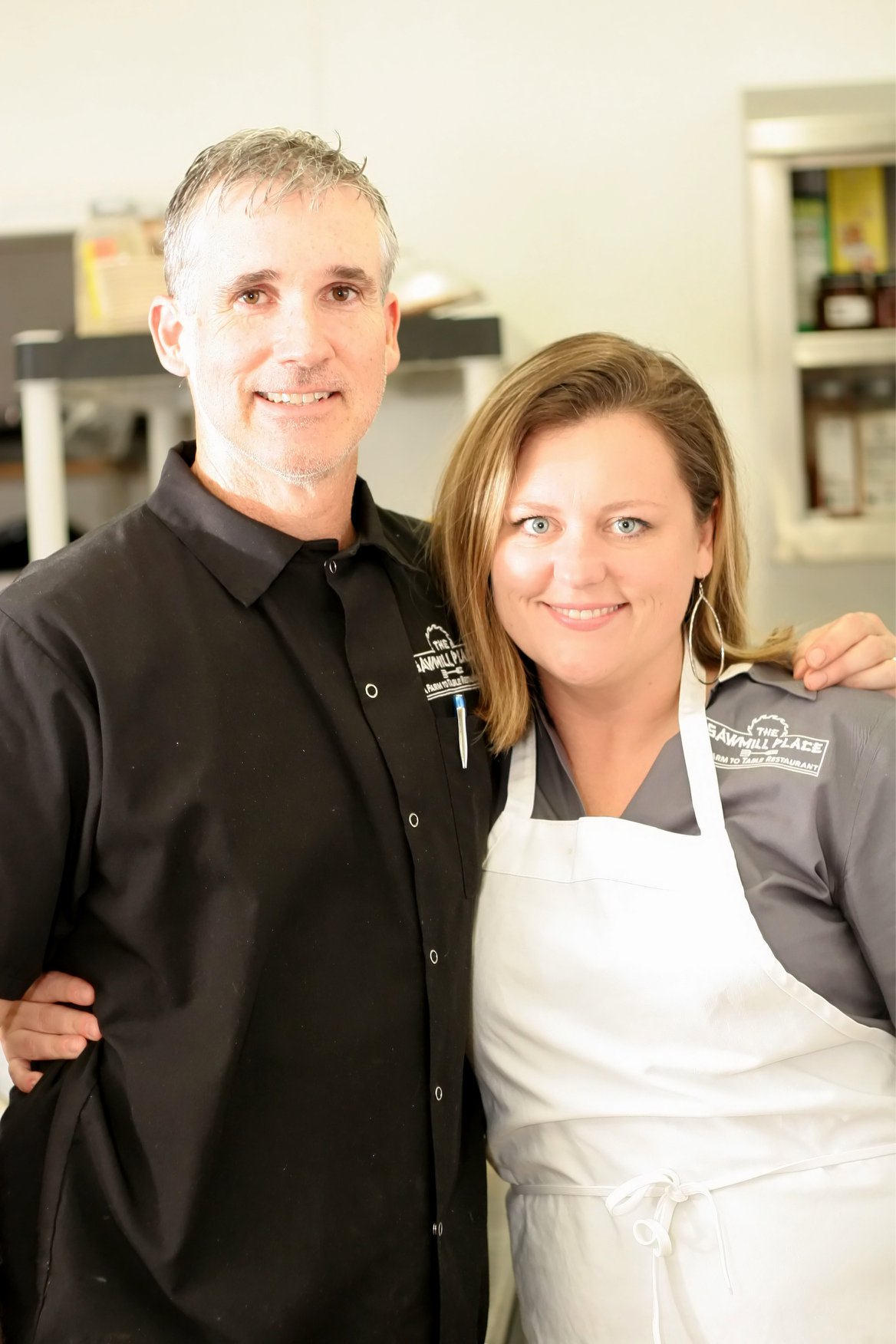 Shawn and Amy Kight
Generational recipes using farm fresh product is the basis for our kitchen’s concept.   The nostalgically Southern menu changes depending on the season and harvest.  We support our local farmers and purveyors and believe you’ll taste the difference in the bounty of our mountain farmlands. 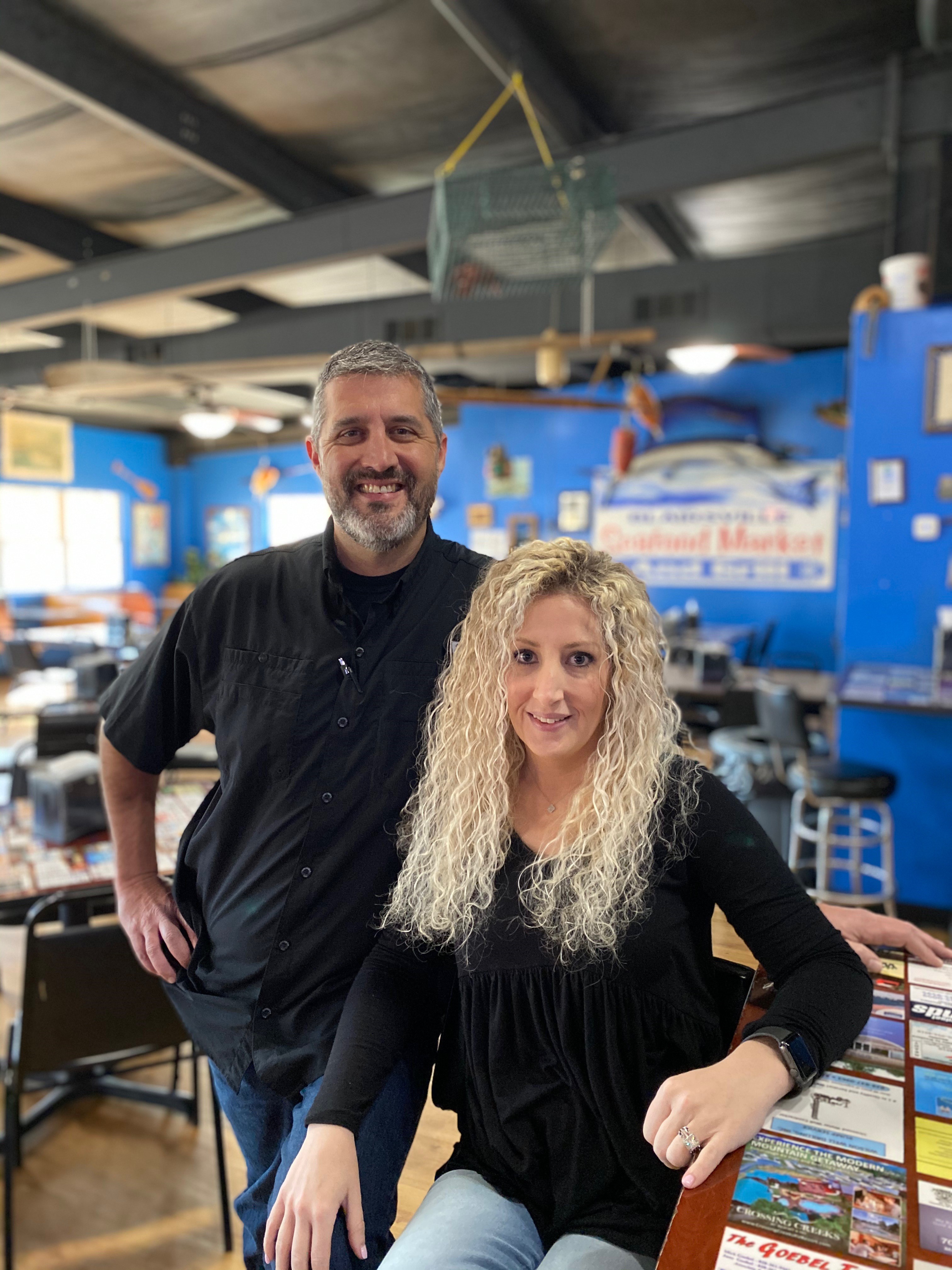 Stephen and Ashley Holland
Stephen and Ashley cut their teeth on seafood down in Savannah where it was always fresh and inspiration for recipes evolved from thick, southern roots.  Moving to the mountains of North Georgia, Ashley brings her southern, Savannah twist to local seafood restaurant, MIke's where she serves family recipe specials and crowd favorites created from the highest quality ingredients and freshest seafood available. 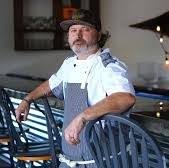 Adam Daniel
From the website, Chef Adam is described as a "Small town kid" who "cuts his teeth in the kitchen of the family owned BBQ joint. Grows up and follows his dream, relying on talent and determination as he studies under the best chefs in the country."  Indeed Chef Adam's resume is quite impressive as he has worked among culinary elites such as Atlanta’s fine-dining bastion, Bacchanalia and James Beard Award Winners, Traci Des Jardins and Paul Kahan who was also a “Food & Wine, Best Chef in the Country” honoree. Chef Adam sought to escape the "hustle and bustle of city life and Adam and his family moved to the mountains in the fall of 2018 where he quickly immersed himself in the abundance of farm fresh ingredients and local flavors creating a unique blend of east and west coast masterpieces" which he serves at the restaurant Peak at 7M Family Farms where you'll enjoy a farm to table menu that changes daily with the harvest. 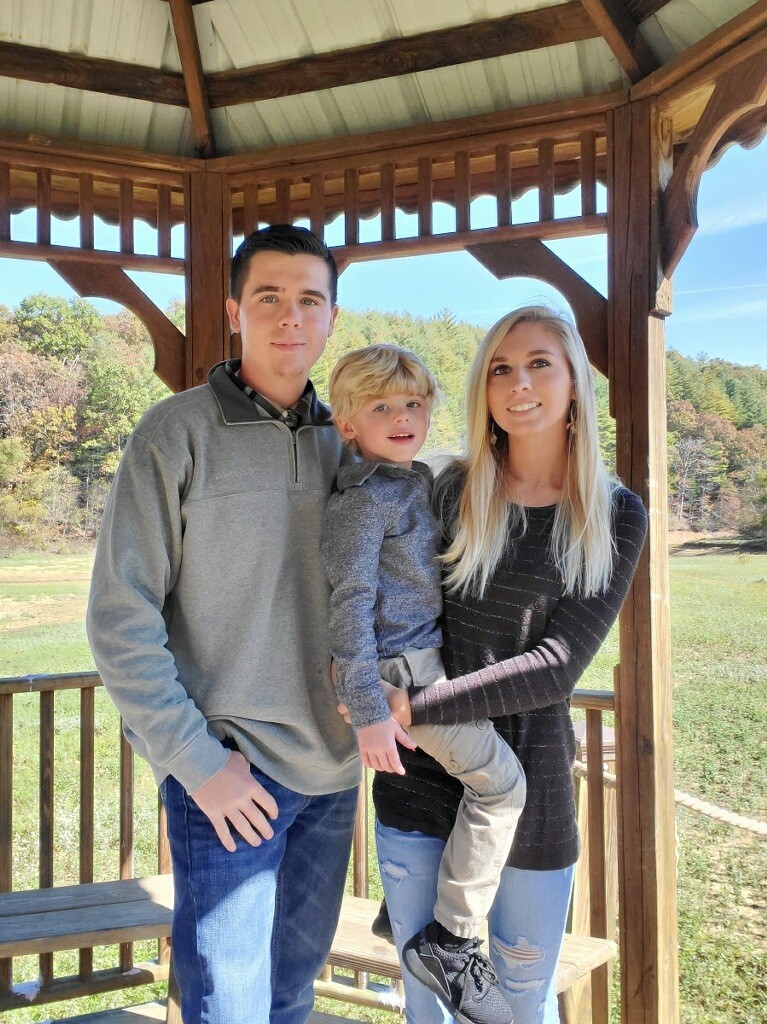 Kevin Sharpe
Chef Kevin Sharpe is employed at The Bean Pod Shoppe in Blairsville, Ga.
Kevin has chosen to share his Holiday Cabbage Casserole dish. Kevin attended North Ga Technical College in Blairsville Ga, and trained alongside Chef Michael Collins for 6 years.
Holiday Cabbage Casserole is a dish that is a result of Megan’s support and love for Kevin’s career goals.  As a young married couple, Kevin and his wife Megan, cooked and mixed ingredients to create their own meals; they worked together in their tiny apartment kitchen   and created wonderful foods. 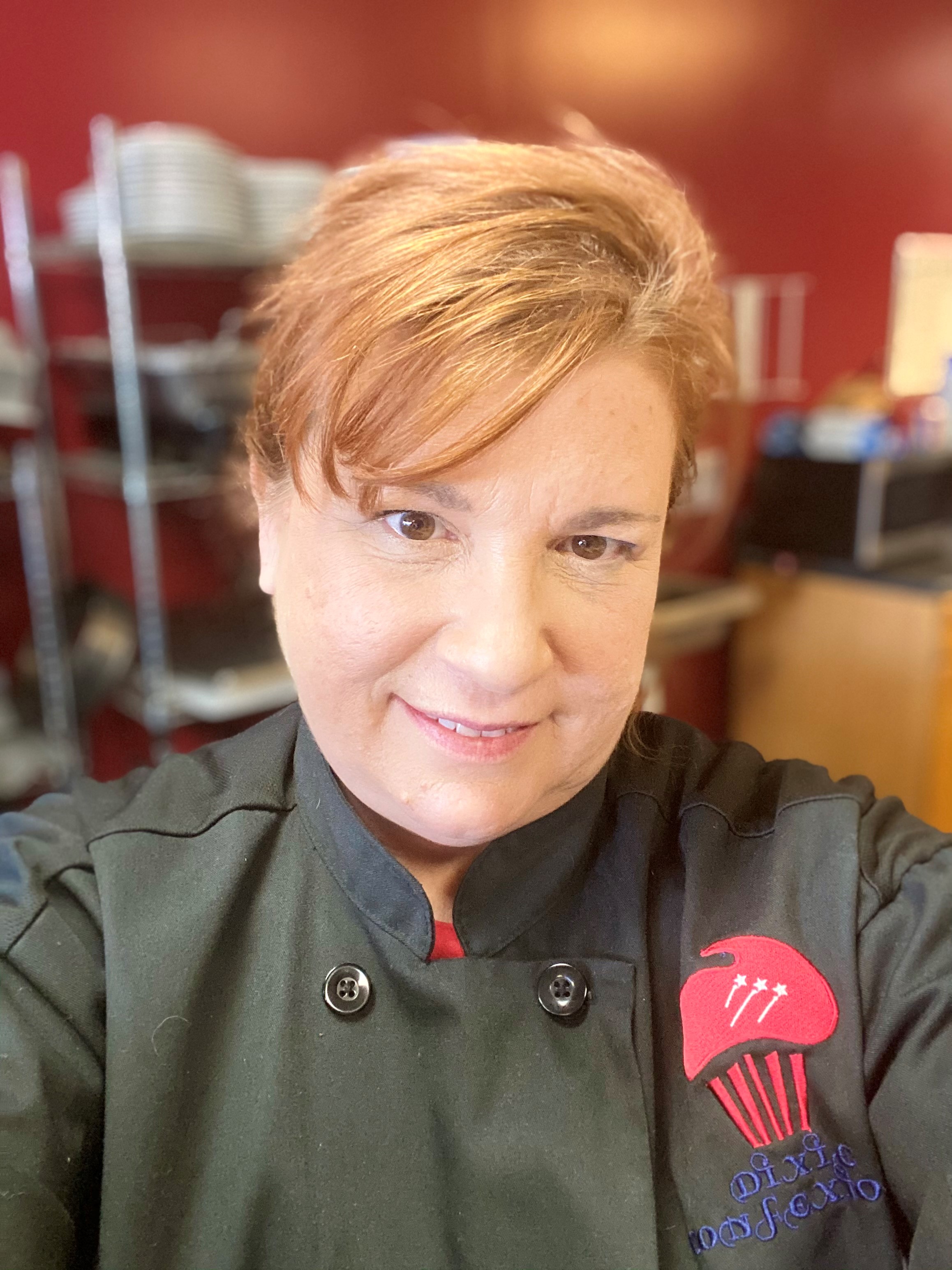 Jody Atkins
Jody Atkins is Co-owner & Creative Director of Dixie Confexions Bakery in Blairsville, GA. She and her husband/partner launched Dixie Confexions in 2016, after a 20-year career in the hospitality industry, planning national conferences, trade shows, and special events. Moving to a small town in Georgia and opening a bakery had been a life-long dream for the pair. “We longed for a more simple life after working in corporate America for so many years,” Jody said. “We were at a mid-life fork in the road when we decided to move to Blairsville and fulfill our dream.”  Today, she serves wedding clientele for area wedding venues such as Enotah Valley Event Center, Brasstown Valley Resort & Spa, The Ridges Resort, The Barn at Young Harris, Southern Tree Plantation, McDowall Acres, and Conley Creek Events.  Jody currently serves on the board of the Blairsville Union County Chamber of Commerce. Jody has a Master’s Degree in Consumer Economics and a Bachelor’s in Consumer Journalism, both from the University of Georgia.  Her former company is a three-time recipient of UGA’s prestigious Bulldog 100, UGA’s top 100 fastest growing alumni companies.